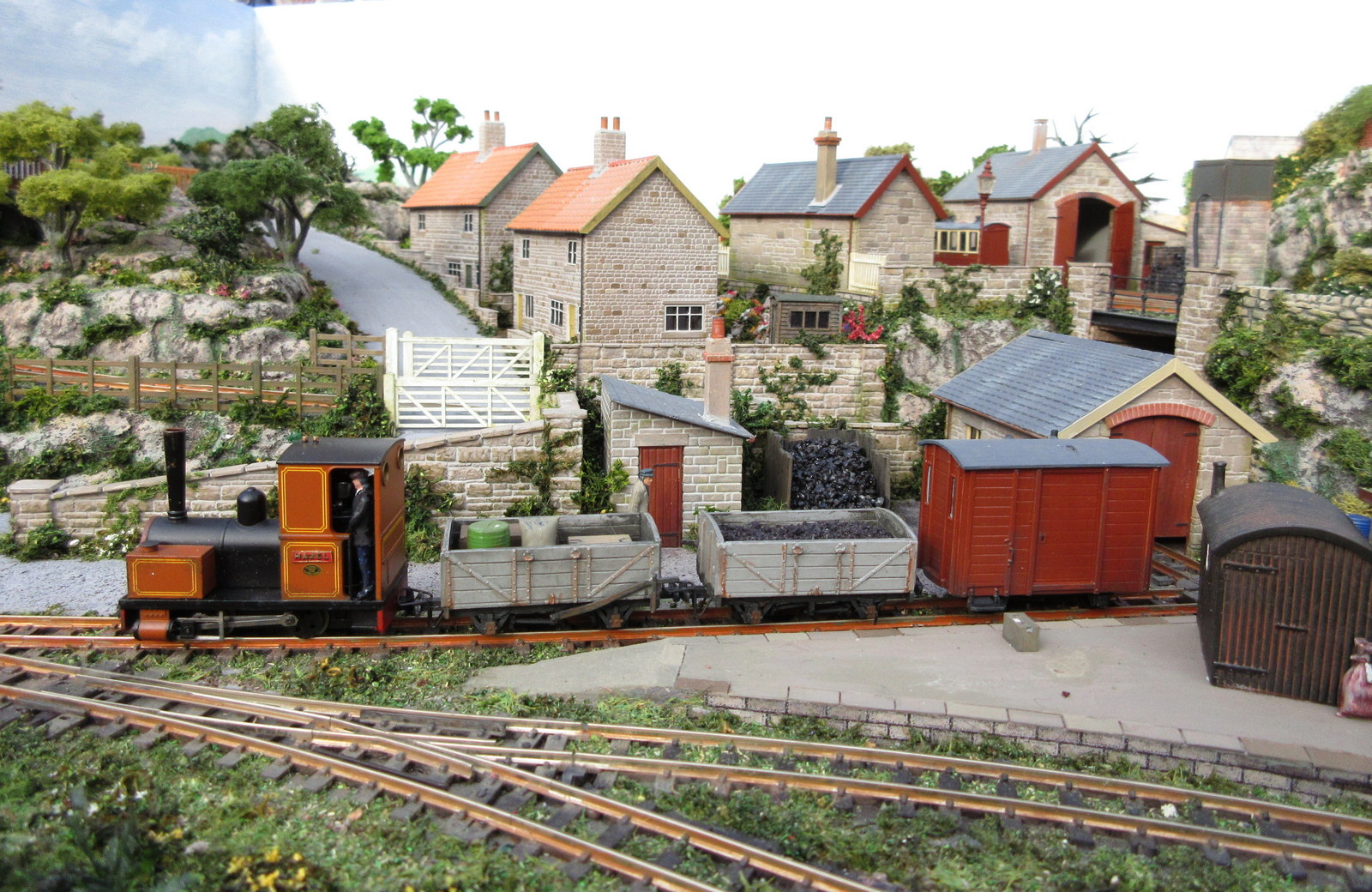 This layout depicts a fictitious narrow gauge line travelling through the scenery of the North Yorkshire moors to a small hill village.  The idea is based on plan S34 in the Peco book “60 Plans for Small Railways”, I had seen several versions of this planpictured on the internet, but when I saw photographs of a similar, excellent layout called “Return to the 70’s”, it was the trigger to build my own version of it.  It featuresan involute track plan and but also reflects my own initial interest in 009 from the1980’s.

The board I had available was 44” x 24”, I have taken the rear of the return loop on the higher level out through the back scene, down the rear of the board to join up with the lower station, this allows continuous running, quite un-prototypical, but my wife and I prefer running a continuous layout at exhibitions.

I had been modelling in 009 for over thirty years, but I had hardly any 009 stock as I had sold it all to model in a larger scale.  So, starting again, most modellers would build locomotives and stock and then later build a layout for it to run on, I chose to do it the other way round! The track plan was drawn directly on to the piece of 6mm plywood to see if it would fit the board, the average track radius was 7.5”.  The rest of the baseboard was built with similar 6mm material, then careful arrangement of the gradients was planned using graduated wooden blocks to support the track bed.Large holes were made for access to the tunnels, and also a separate removable sub-base was made for the Shortwaite village scene and goods yard. Peco irregular-sleepered track was used, and pinned onto Woodland Scenics N scale Track Bed.  Point control is by wire-in-tube using Hugh Craig Piano Wire, but this was tricky to install on the upper level.

The scenic hills were made using woven cardboard strips with layers of newspaper stuck with PVA, we then used pre-coloured hydro-fibre modelling compound for the rock faces.  When dry they were dry-brushed with acrylic grey, fawn and greentones. Ground cover is a mix of sawdust, PVA, acrylic dark grey and lightweight filler.   Most of the structures are scratch built using Wills materials sheets but I have used part of a Wills Barn, a couple of coal office kits and two old modified Hornby Country Cottage kits.  I have deliberately placed buildings at angles to give more character and also tried to place scenic features as view blockers to distract from the convoluted track plan.  Everything is weathered giving an impression of moss, damp stains and weeds. My wife then tackled the greenery using Woodland Scenicsfoliage and tree armatures, lichen, cut up K&M hedging strips, also making flowers and shrubs.

Locomotives so far are two Minitrains Bagnall Wing Tanks, a Narrow Planet Bagnallsaddle tank on a Minitrains chassis, a modified Peco “James” kit on a Kato 11-103 chassis, a noisy Jouef Decauville (because I like them), a bargain rail bus (Corgi die-cast body/Kato 103 chassis) and a strange but useful diesel tractor made from various parts. The layout is only really suitable for 4-wheeled stock, and I have built up a deliberately assorted fleet of four-wheeled coaches by Ashby/009 Society and Dundas Models.  Goods wagons are mainly Dundas kits with a few oddities.  All stock is brush painted and “grimed” with Humbrol enamels.  For couplings, I usecarefully made Peco GR-101 couplers with loops mainly on one end of the stock.

I must thank my friends in the Norfolk & Suffolk Narrow Gauge Modellers for supplying me with some of the stock, and also their enthusiasm and encouragement.  There are some excellent modellers in the Group. (http://nsngm.org.uk)

More info on this and our previous layouts at: https://grums009andgn15lines.blogspot.com or google “grums narrow gauge lines”.

Based in Norwich, Norfolk

We exhibit around East Anglia.