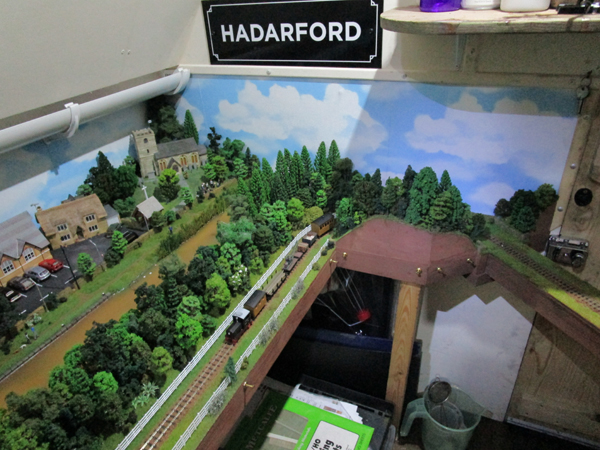 I inherited some “OO9” rolling stock from my late father in the year 2000, including a loco I built from a white metal kit for him, and ever since living on our working narrowboat Hadar from 2007 I have been thinking about building a “OO9” layout. In 2013 we acquired our full residential mooring in Warwick, and as a consequence of taking up the mooring, and spending most of the winter on the mooring, and not being allowed to sell coal from our mooring we decided to wind down the coal business.

I had thought about building a layout in our garden alongside our mooring at the Saltisford Canal Centre, but after much thought decided that this would not be practical. However I built a small layout which sat on the shelf above the display cabinet, in our saloon, which houses my “O” gauge engines and rolling stock. Having finished it, my wife Jo suggested that when we had sold the remaining coal I could build a layout in the hold. When we finally cleared the hold of the remaining coal, my wife Jo and I built an insulated timber railway room underneath the sheeting, and then I set about building the layout in 2018, which I have named “Hadarford” after our boat which is called “Hadar”.

I have a dedicated blog www.hadarford.uk which covers the whole project, including the building of the railway room in the hold to build the layout in.