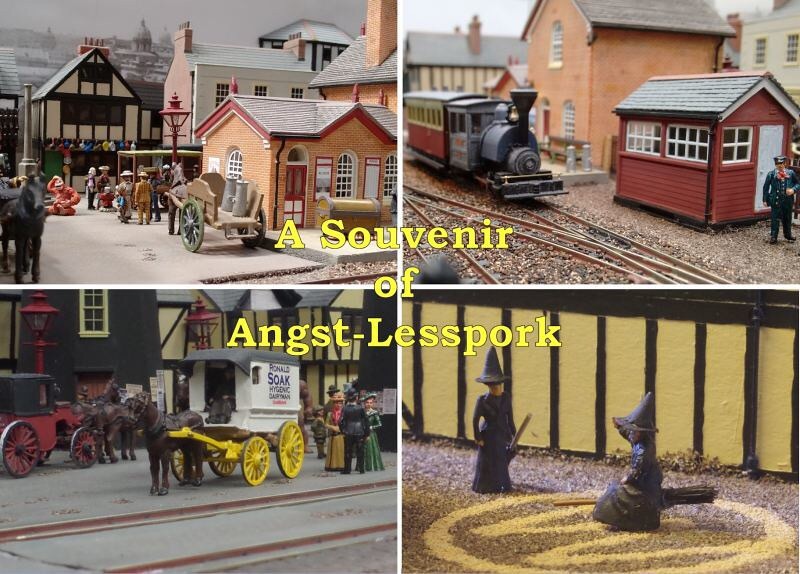 Angst-Lesspork draws its inspiration from and is a tribute to the “Discworld” books of Terry Pratchett (describing a flat world travelling through space on the backs of four elephants which in turn stand on the back of a giant turtle…), and in particular the greatest city on the Circle Sea, Ankh-Morpork.

The scene For this 009 layout is urban with a tidal river to the front. Buildings are predominately timber-framed. Although superficially a Victorian / Edwardian townscape, many characters and architectural features give clues to the layout’s true identity.

Helping to set the scene are the Alchemists’ Guildhall (complete with stuffed alligator), one of the many Watch houses, a (working) Clacks tower and, of course, Mad Lord Snapcase’s Cruet set. Looming over the rear is the back of the Theatre. There are also a number of privies to be found. Most of the buildings are scratch-built from card; a number are illuminated and so have internal decoration.

Human figures in Victorian / Edwardian costume are readily available; finding wizards, dwarfs, trolls and other out of the ordinary figures is more problematic. Fortunately, the war-gaming fraternity could supply many of these figures. The Librarian – and the stuffed alligator – were commissioned pieces.